She graduated with Honors from the National School of Folk Arts “Filip Kutev”, Kotel and a Master’s degree at the Academy of Music, Dance and Visual Arts, Plovdiv. She worked extremely successfully as a conductor at the Ensemble for Folk Songs and Dances, as well as the Secondary School Folk Choir in the city of Sliven.
She has more than 30 years of experience as a teacher at the National School of Folk Arts “Filip Kutev”. She teaches choir and choral studies, music history and piano. In her long career as a conductor of the NUFI folk choir, “Filip Kutev”, she has performed hundreds of concerts and won many awards from prestigious competitions in Bulgaria and overseas. She has released two CDs – “At deybreak” and “New Bulgarian Music”, as well as a double album DVD “Tiesto in concert”.
Katya is a founder and a chief artistic director of the “Katena” Chamber Formation and together they performed at various concerts all across Europe and many other countries. They also took part in a film project called “Metamorphoses” and “The Bulgarian Voice – the Unknown Instrument”.
Every year, Katya Barulova conducts choir master classes and also provides methodical assistance in mastering the specific Bulgarian folk dialects.
An important creative period for Katya Barulova is her work for the “Bulgarian Voices – ANGELITE” choir with manager – Tanja Andreeva, under an European Music Label JARO Medien.

Katya shares:
„ For me, this is the perfect composition, creative inspiration and love, hope and strength for the future of our choral art. The “ANGELITE” are my drive, my dedication and my creative joy. Making music with them is patient work and mutual development, leading to thousands of audiences all over the world and great joy of the shared music!
Over the past couple of years, we completed many musical projects, concerts in Germany, Belgium, Poland, Russia, Czech Republic and Japan in front of a large and enthusiastic audience and we released another CD with the meaningful name – “Heritage”. During this project, we worked with extremely interesting and emblematic names, composers and bands. The composition is flexible and fits into various projections for sound and space, such as the work with the Japanese video game sound producer and composer – Yasunori Mitsuda and impressions for a female folk choir and ancient bamboo instruments of the 7th century – “SHO”. ‘‘
Katya Barulova is а winner of numerous awards from prestigious competitions and festivals in Italy, Spain, Netherland, Costa Rica, Ireland and many other countries. She has been awarded by the Ministry of Culture of Bulgaria for her contribution to the development of the Bulgarian culture. She also has a “Golden Lyre” award from the Union of Bulgarian Composers and a silver plaque “Antim I” from the National Assembly of the Republic of Bulgaria.

Their voices are fascinating, their style of singing and ornamentation is archaic, distinctive and rooted in centuries of local tradition. The Bulgarian Voices Angelite stands for the worldwide spread of the famous Bulgarian women choir singing since 25 years. Their international success (shows at the Nobel Price Award, the Red Square in Moscow or at the Grammy nomination 1999) and the non breaking international fascination throughout the years shows their uniqueness and quality.

The choir is among the most renowned ensembles in the categories of Balkan and Bulgarian folk music. It was formed as a private choir from the ashes of the old State Television Choir, dating back to 1952, by the State Choir’s manager: Tanja Andreeva. The comprises two dozen female singers from across the nation under the leadership of Georgy Petkov.

Prior to the fall of communism, the Bulgarian Voices Angelite were largely unknown to the world, but in the years since the Iron Curtain was lifted the ensemble managed to enchant the world with their singular blend of classical and folk traditions. This blend is further supplemented by their mysterious and cryptic manner of singing– peculiarly suspended, frequently dissonant (e.g. with major and minor seconds), and completely void of vibrato. To say that the Bulgarian Voices Angelite is a mere folklore ensemble is to overlook its true potential. They have established an authentic style of their own by managing to advance in the sphere of art music, drawing inspirations from modern Bulgarian composers e.g. Philip Koutev, Stefan Kanev, Dimitar Dinev, Stefan Mutafchiev, and Nikolai Kauffmann, embarking on journeys with rock (Elio E Le Storie Tese), jazz (Moscow Art Trio), throat singing (Huun-Huur-Tu), hip-hop, and classical fusion (Sarband), whilst preserving its Balkan heritage derived from musical exchanges between Russia, Greece, Turkey, Hungary, Romania and Bulgaria. Therefore, then listening to the choir, the boundaries between East and West, young and old, pop and classic seem to disappear.

The Bulgarian Voices Angelite has released many critically acclaimed albums internationally and are multiple Grammy nominees. Globe Music Media Arts is their U.S. record label, and JARO Medien is their European label (the same label that represented the old State choir).

In 2012 the Bulgarian Voices Angelite started working on a new CD Angelina: a remarkable music program, in which the folklore of the ancient times enriches and renders its emotional energy to the music of today. The program surveys the contemporary music reality in the realm of folklore.

The cryptic, mysterious, perhaps even somewhat mystical quality that characterizes the choir’s sound arises primarily from the singers’ preference for a second voice which is maintained a slight interval to the leading melody. The Bulgarian Voices Angelite produces sounds of the most peculiar vocal timbre, almost as if it was not produced by the human vocal apparatus at all, but by an instrument from some foreign corner of the world. The singers use glissando, shouts, and crazy rhythms. This results in a kind of nearly-dissonant friction as well as a great radiant power similar to an unfolded color spectrum. The Angelite’s voices fan out into a colorfully glowing sound palette that plays with overtone resonance.

Bulgarian Voices Angelite’s Performance
The Bulgarian Voices Angelite has performed practically everywhere: Germany, the Netherlands, Belgium, Denmark, Switzerland, Austria, Spain, France, US, Canada, Mexico. This is the choir that amazed the audiences on the Red Square in Moscow, and the royal families in Holland and Denmark. is the choir who has performed for the Maharajah of India, and at the Nobel Peace Prize Awards in Oslo. This is the choir for whom Phil Collins recently wrote the song “Transformation,” featured on the soundtrack and DVD of Disney’s “Brother Bear” hit movie. This is the choir recently featured in a multi-page color photo shoot in The New York Times Magazine.

No one who has experienced one of the many concerts performed by this incomparable, legend-in-its-own-time choir has been able to escape the charm and fascination of its voices. On concert tours around the world, the singers have roused the enthusiasm of countless listeners with their surprising, enchanting and incredibly precise singing able to touch the soul.

Katya Barulova graduated with highest scores at the music high school in Kotel and achieved her master degree at the Music Academy in Plovdiv.
She has more than 30 years experience as a teacher in the National School for Folk Arts “Philip Kutev”mainly in the subjects of choir development, History of Music and piano. She has accomplished master classes for choirs and individual studies, methodical help to obtain
proficiency in the specific Bulgarian folklore dialect, as well conducted hundreds of concerts in Bulgaria, Italy, Germany, Austria, USA, France, Poland… Katya Barulova has won a number of awards from prestigious competitions and festivals in Italy, Spain, Nederland, Costa Rica,Ireland and special awards from the Bulgarian Ministry of Culture and the Union of the Bulgarian composers.

Impressario
Stoyanka Andreeva– born and raised in the city of Plovdiv, Tanja studied economics before being employed by the Bulgarian State TV and Radio in Sofia. There she started her intensive involvement with Bulgarian music and especially with the famous Bulgarian female choirs. She helped to found Angelite and acts as its personnel manager, researcher, translator, tour manager and, when necessary, group psychologist. With great competence and professional expertise she pilots Angelite through the turbulent seas of the international music business.

“A mysterious marvel.“ Toronto Star, US

“The most beautiful music on the planet.“ St. Louis Post Dispatch, US

“Throaty sounds course above low drone notes and wide-open harmonies, the ensemble’s performances provide one of the most unique and compelling experience in music” LA Time 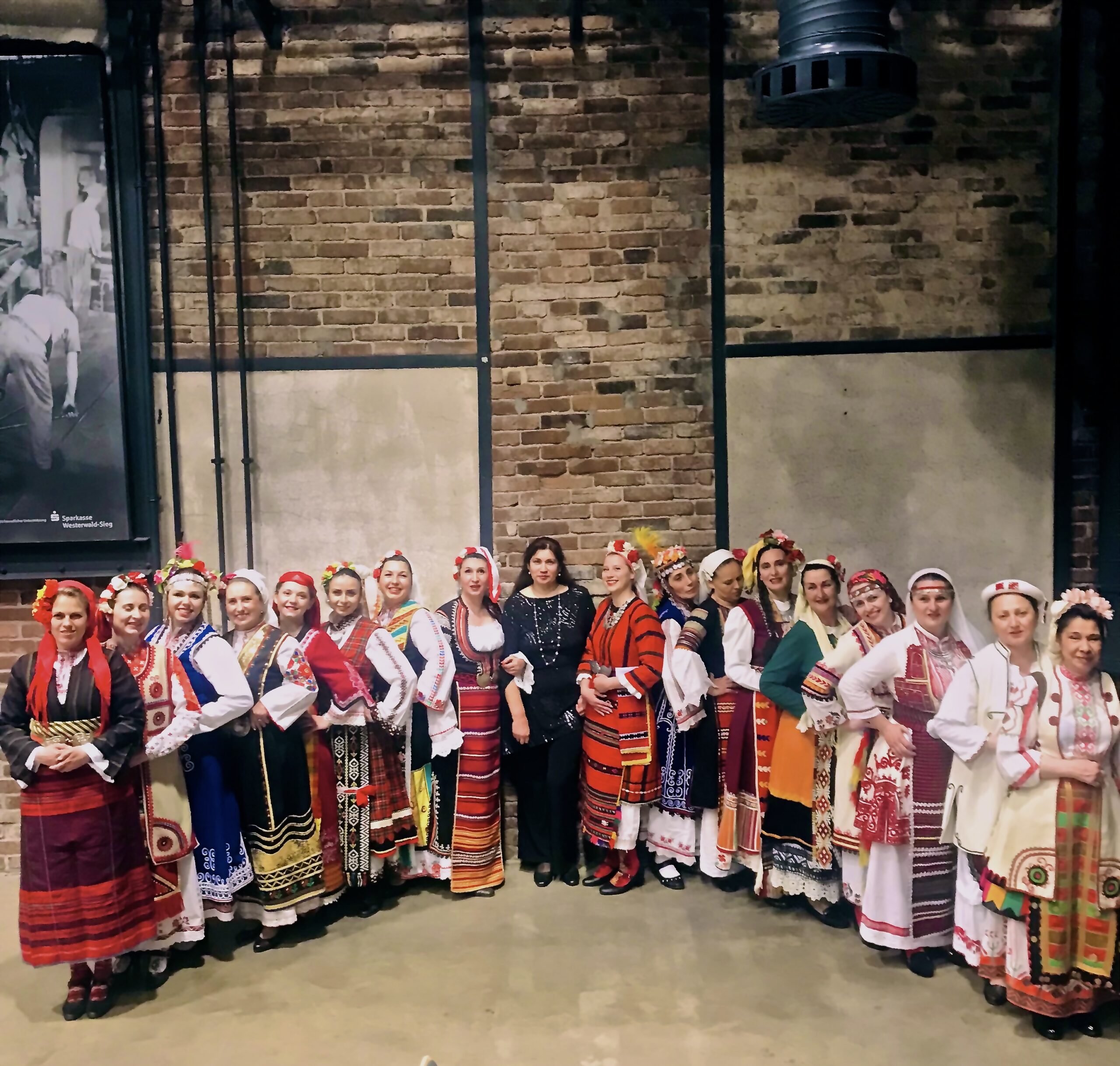 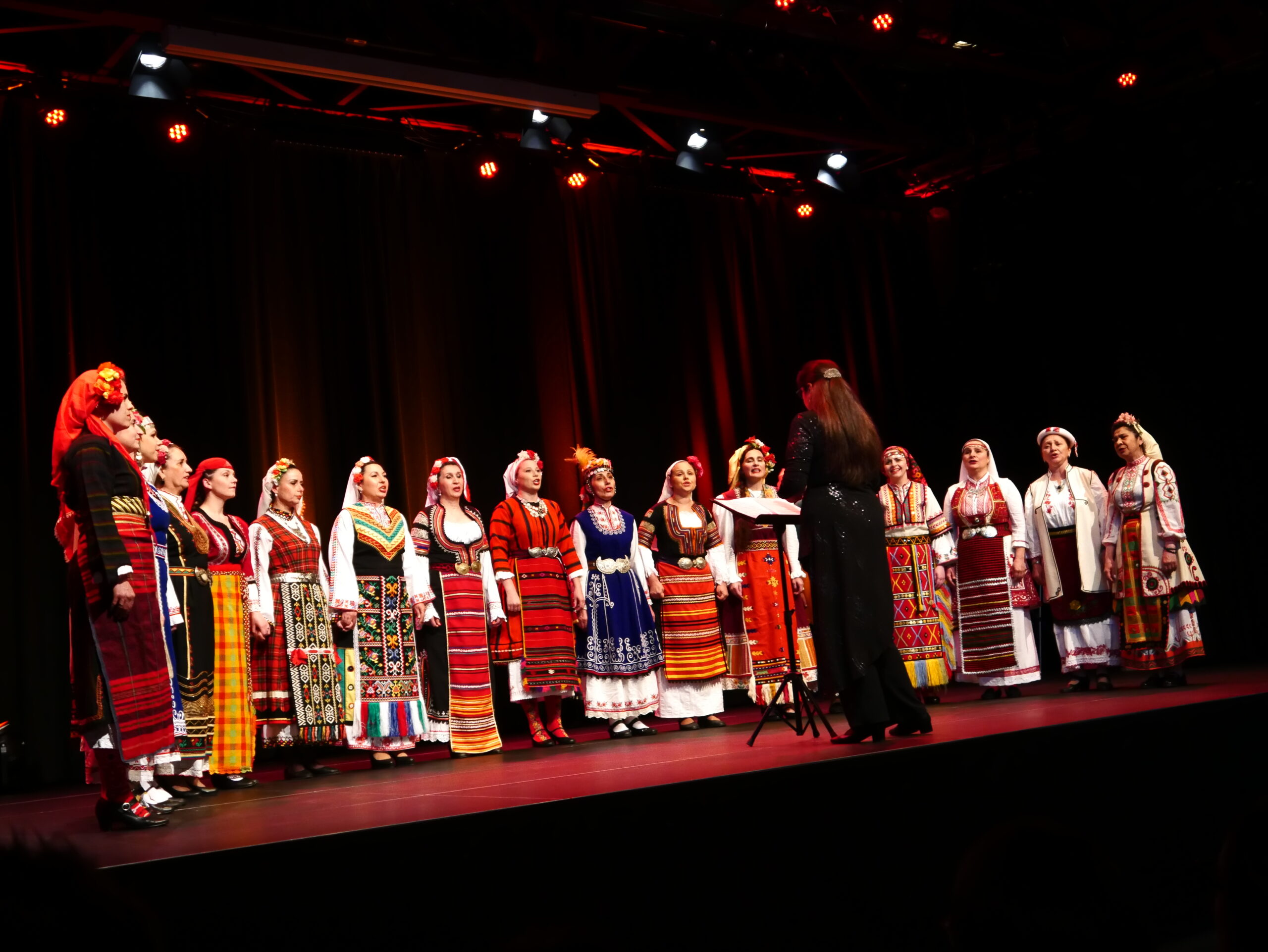 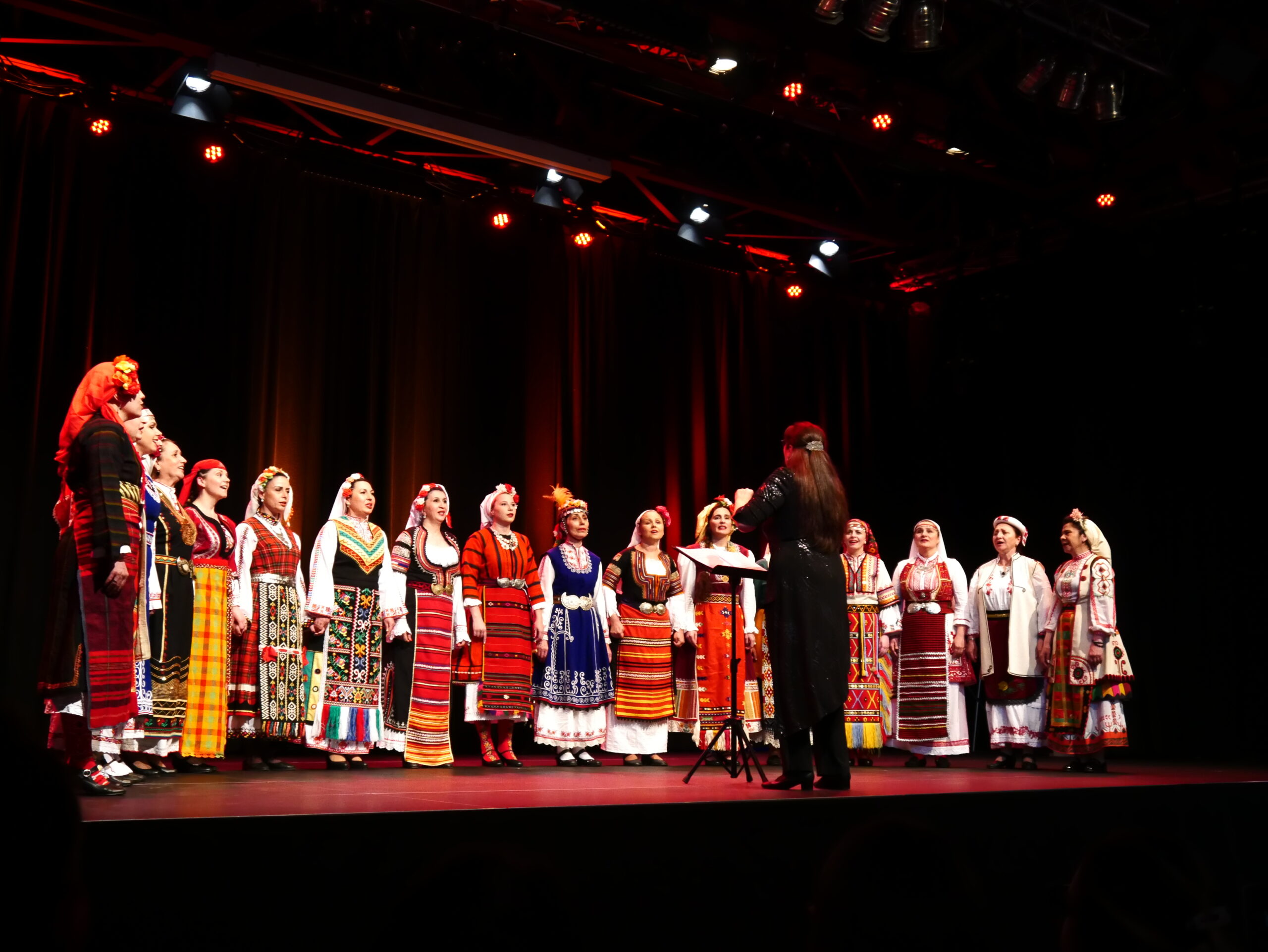 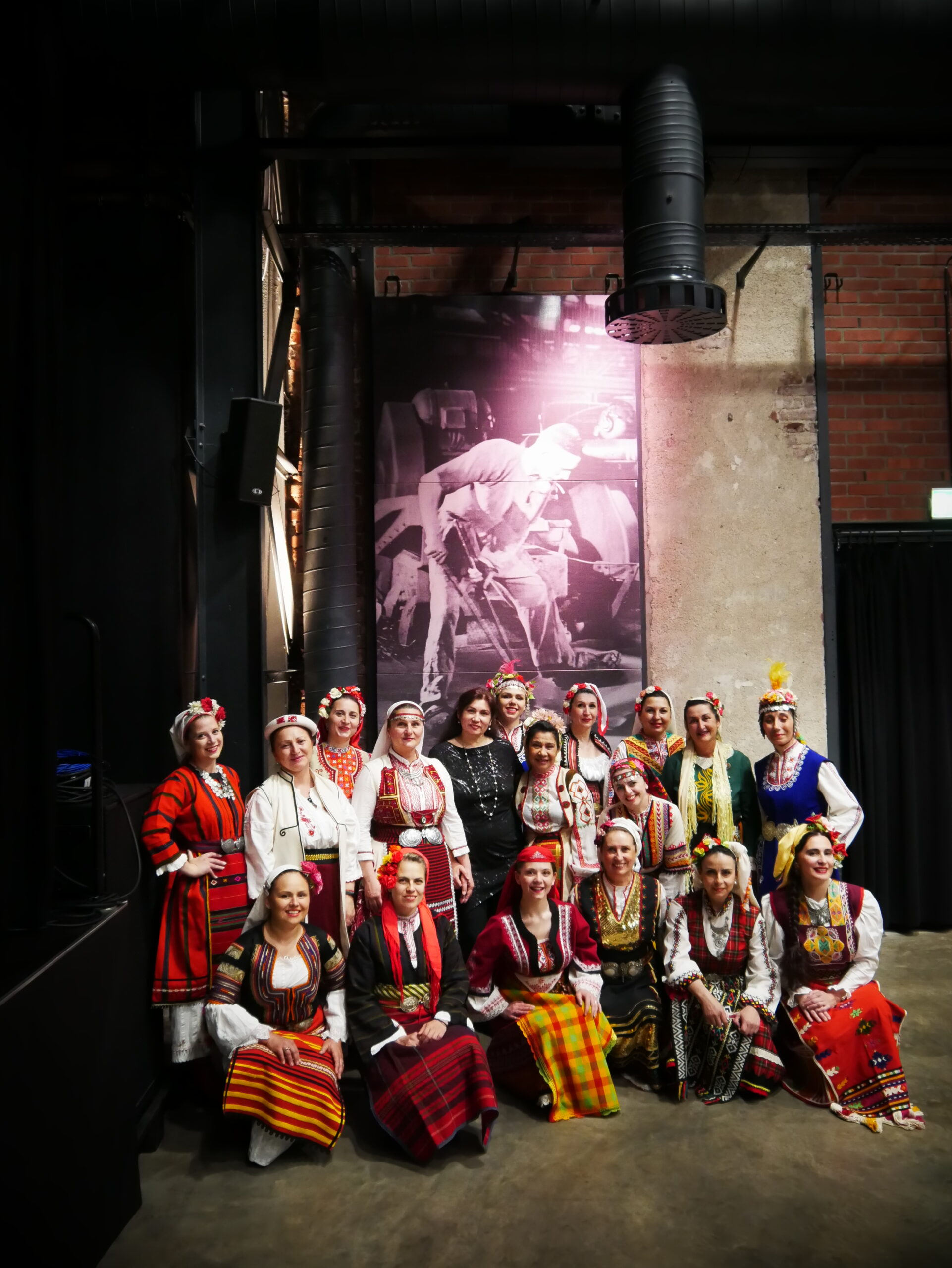 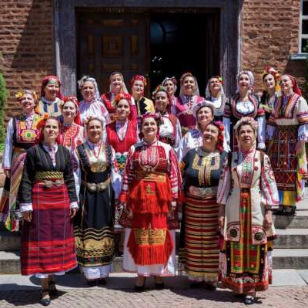 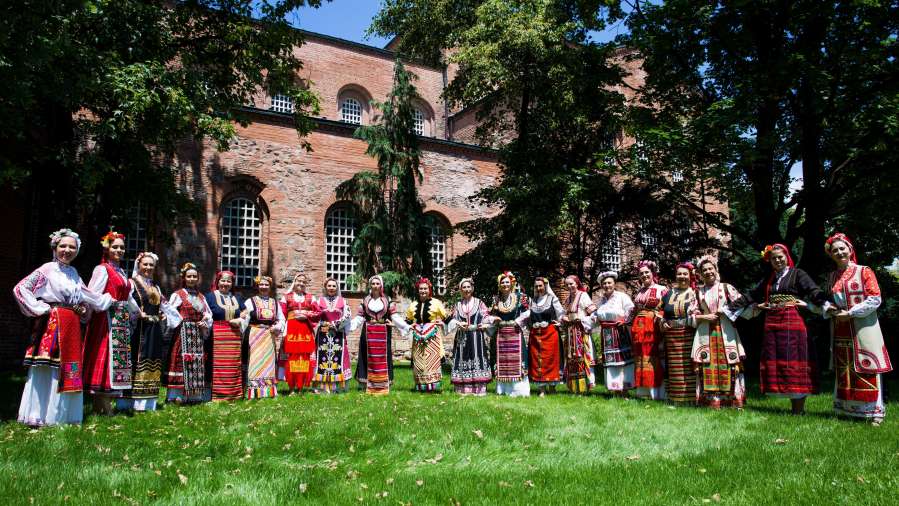 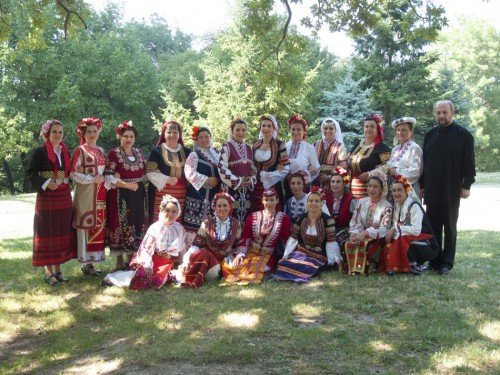 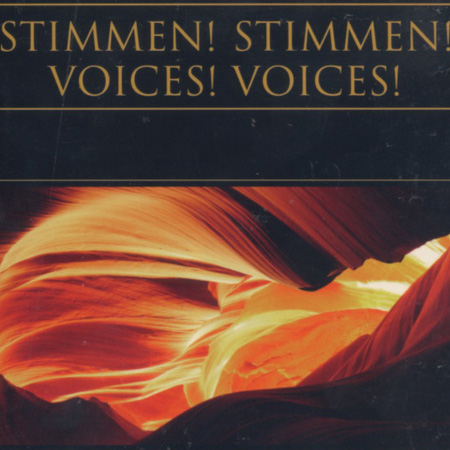