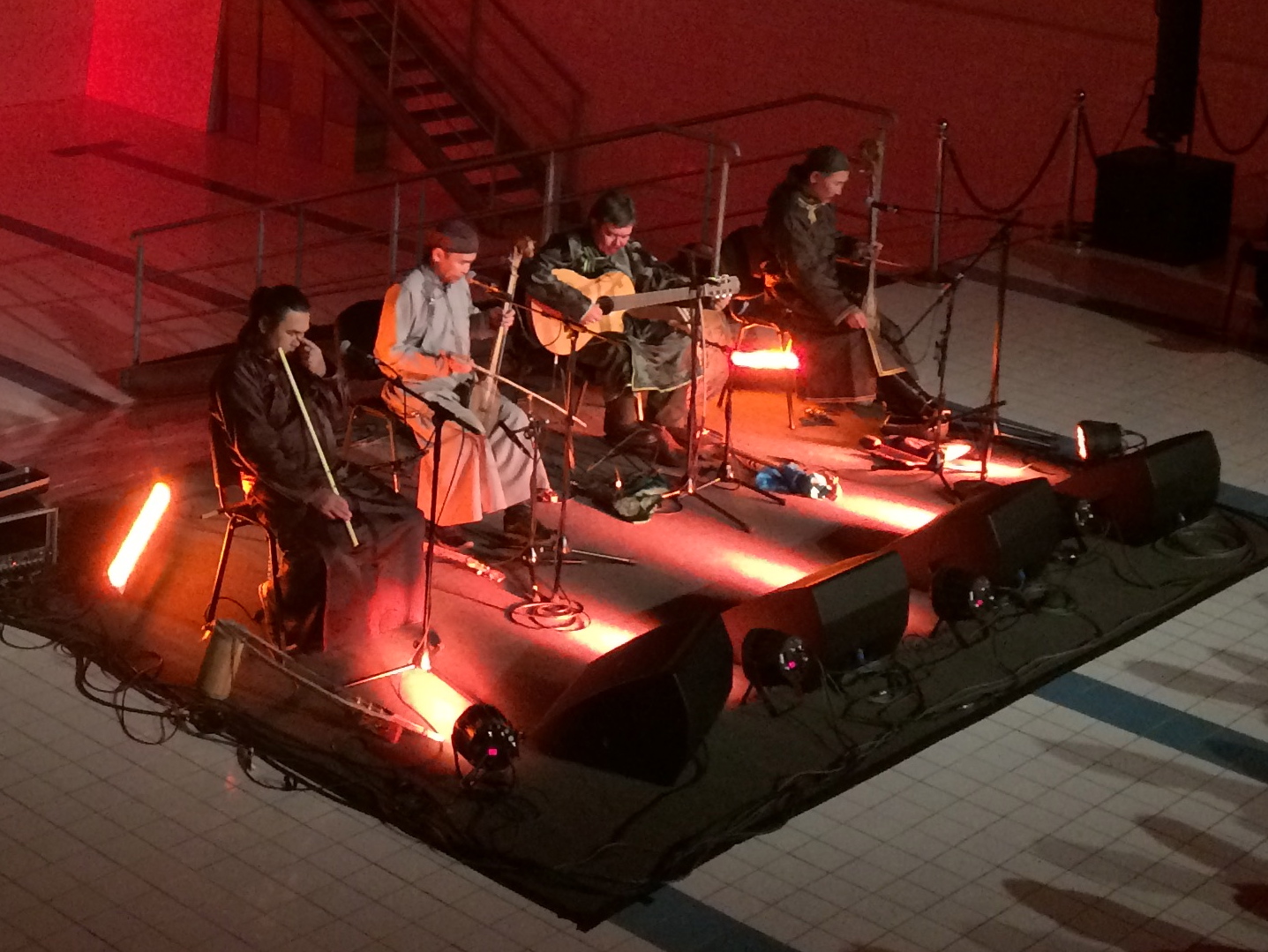 In 1992, Huun-Huur-Tu was founded by Sasha Bapa, his brother, Sayan, and two other musicians, Kaigal-ool Khovalyg and Albert Kuvezin. Ever since they have tried to focus on the performance of “old and forgotten songs”, as Sasha put it. Sasha, Sayan, and Kaigal-ool were refugees of one of the large state-managed song and dance ensembles that became fixed institutions of the public cultural life during the Soviet era. For decades these ensembles with their glitzy performances of folk music or pseudo folk music offered the only possibility for young musicians to play indigenous music for a living. Throughout the privatization of the music business in the former Soviet Union, many musicians decided to abandon these state ensembles and form their own groups. The musical results have decidedly been mixed.

In an interview for the American producer and critic, Ted Levin,  Sasha Bapa  explained the meaning of  ‘Huun-Huur-Tu’ as the vertical separation of light rays that one often see out on the grasslands just after sunrise or just before sunset. It seems to be a metaphor for the band’s key element– throat-singing that “consists of producing a deep tone in such a way as to create one or two substantial harmonics. The first harmonic is a humming sound in the mid-range, and on top is a loud whistling tone that the singer raises and lowers to create a weird sort of melody by varying the embouchure” (Jon Sobel, Blogcritics Magazine). In this light and through their heavy touring, Huur-Tu can truly be seen as a leading force in popularizing throat singing or khöömei the past  decades.

However rooted in Tuvan traditions, it would be a mistake to attribute Huun-Huur-Tu to a folk ensemble. For the first time, Huun-Huur-Tu laced in the pop charts with a remix of the title “Eki Attar”. It became Greece’s No.1 hit in the summer of 2002. The ensemble then went on to release a studio project entitled ‘Spirits of Tuva’ with Djs of various nationalities. They have performed with Ry Cooder, Frank Zappa, The Chieftains, Johnny “Guitar” Watson, Kronos Quartet and L. Shankar among the others. The ensemble’s collaborations do also include other members of  JARO: Hazmat Modine, The Bulgarian Voices– Angelite, and Moscow Art Trio.

Huun-Huur-Tu’s style could be best described as profoundly mysterious. This comes as a consequence of their traditional, ritual laryngeal chants descending from Central Asian land of Tuva. This unique song technique reside on developing an enthralling sound cosmos rich in undertones and overtones.

The members of Huun-Huur-Tu have devoted themselves to learning oId songs and tunes, but at the same time their performances reflect the values of globalization. The whistling of the high-mountain wind forms eerie overtones and postmodern statement. The repeated thrum of a string against wood and hide turns into a meditative, evocative figure straight from the avant-garde. The descendants of isolated Siberian herdsmen make serious, strangely universal music out of some of the planets quirkiest acoustics.

As they began touring in the West, Huun Huur Tu almost single-handedly introduced the outside world to the boundless wealth of Tuvan traditions, thanks in great part to their superior musicianship. Hailing from the high pastures of the Altai Mountains in south central Siberia, the musicians have spent decades honing the overtone singing, instrumental approaches, and vibrant songs of their home.

Steeped in Tuvan folklore, the ensemble wears traditional garb and accompanies themselves on string and percussion instruments, playing galloping rhythms that evoke the vast south Siberian steppe. Their tightly structured pieces often imitate natural sounds, so that a song can be a literal representation of a Tuvan landscape.

Jon Sobel of the Blogcritics Magazine characterized the ensemble’s live performance as: “[…] the music is as warmly human as any folk style, and it’s not all khoomei. The four men have six or seven very distinct singing voices among them. Accompanying themselves on plucked and bowed stringed instruments, percussion, and jaw harps, they emulate biological rhythms in song: heartbeats, breathing, a brain drifting in dreamland, and not least (for a nomadic people), a horse’s trot. The songs are about romantic love, love of place, and (not least) horses, with moods that range from lyrical and thoughtful to joyful, humorous and danceable.”  In this sense, the San Francisco Bay Guardian concluded that the Tuvan show: “will ride into your brain and leave hoof-prints up and down your spine.”

Khovalyg is a very talented autodidact singer. He worked as a shepherd, until he was invited to the Tuvan State Ensemble. Then he moved to Kyzyl. Kaigal-ool is one of the founders of the ensemble “Huun-Huur-Tu”. In 1993 he left the Tuvan State Ensemble to devote himself to newly created quartet. Khovalyg primarily known for he’s unique vocal styles khoomei, kargyraa and playing igil – traditional Tuvan instrument.

Radik studied throat singing and playing traditional instruments from his grandfather. Every summer he went to his grandparents in distant taiga camp. Listening to throat singing of his uncle and grandfather Radik learned words and melodies of ancient Tuvan songs.
He is a graduate of the School of Arts in Kyzyl (Department of Tuvan National Instruments), and the East-Siberian State Academy of Culture and Arts. From the school years till now he plays in the Tuvan rock band “YER”, which released four albums. In 1999-2000 he worked in the folk collective “Tuva”, then  in the  band “Yat-Kha» (www.yat-kha.com). During this time “Yat-Kha” released 2 CDs and won the BBC Radio Award-3 «Awards for World Music ».
In 2003 Radik also joined in Tyvan National Orchestra as a musician, where he was the director of the group for some time. In 2005, in England, together with ethnomusicologist Carole Pegg from Cambridge University, Radik Tyulyush released the first solo album «Tuva: Spirits of my Land» (www.innerasianmusic.com). He was invited to “Huun-Huur-Tu” in 2006.

His father is Tuvan and mother – Russian. Sayan grew up in industrial town Ak-Dovurak. He studied music in Kislovodsk: he was playing bass guitar in Russian jazz-rock bands during several years. In the early 90s Bapa returned through Tuva to his musical roots. Here he became a member of a folk-rock band which played traditional tuvan music on modern instruments. He is also one of the founders of the ensemble “Huun-Huur-Tu”. Sayan Bapa is a versatile instrumentalist. He plays doshpuluur, igil, acoustic guitar. As a vocalist, he specializes on style kargyraa.

Alexey Saryglar joined the ensemble in 1995, replacing Alexander Bapa. He received his musical education in Ulan-Ude in percussion class and was a member of ensemble “Siberian Souvenir.” Alexey is a talented sygyt musician, an expert of traditional Tuvan percussion and stringed instruments, and also a piano player. He lives in Kyzyl, like other members of “Huun-Huur-Tu”.

“[…] an amazing work of harmonical unity and beauty.” Jazz Thing

“Infatuating and enchanting, abysmal and magical the throat singing sometimes comprises four octaves – the love songs of the larynx acrobats from Tuva have the acoustical depth of a cathedral.” BNN

“They convince by a wonderful combination of  meditative sounds and ecstatic rhythms.”  Tiroler Tageszeitung

„The throat singing tradition from Tuva develops an archaic fascination from which you can hardly withdraw.“ Karlsruhe Kurier

“The longer you listen to the vocal caprioles, the more fascinating becomes this acrobatic onomatopoeia.” natur

No shows booked at the moment.

Question: When did you start to try “crossover” projects? Why?

Huun-Huur-Tu: We started crossover projects from the very beginning of our international career. Our regular tours started in the USA in 1993. 1992-1993 were years of  real explosion of the wide interest to Tuvan music. Our US “breakthrough” happened with significant help of known US musicians, with whom we made joint recordings in 1992-1993. It was Frank Zappa, who invited us to his home studio in Studio City and made recordings of our music with participation of Frank himself on guitar, Johnny “Guitar” Watson, L.Shankar, and Chieftains. It was an incredible cross-cultural experience. Because of Frank´s death this material has been never released…Another joint project was work with Ry Cooder for “Geronimo” movie soundtrack. Doing this work, we were surprised –  how close is Tuvan culture to the culture of native Americans, so both we and American Indians started to believe that their predecessors migrated to American continent from Siberia. We also made several recordings with Kronos Quartet (later released in 2 CDs – “Night Prayers” and “Early Music”), and Mickey Hart – the drummer of Grateful Dead. Why we did all this in 1992-1993? First of all, all these American musicians, representing very different music directions, were eager to do something together with us. It was their initiative. We  were proud to collaborate with them, we also were proud to be true “ambassadors” of unique Tuvan music.

Each folk music, instrument and music genre has different roots and its way to perform. How do you connect your music or yourself with the music or musicians from other cultures?

Huun-Huur-Tu: We have found an amazing thing – ethnic music gives a lot of natural space and common roots for harmonious collaboration. So, usually it is not necessary to work hard on finding special ways of “connection”. Genuine ethnic music is very natural way of communication  between humans, or between human and nature. Regardless of “geography” of this music, we often find common ground and enjoy blending our traditions, improvising, etc. It happened many times – with Bulgarian and Russian traditional singers and instrumentalists, Greeks, Africans, Tibetans, Iranians, Celtic musicians …

You always collaborate with different musicians all over the world; do you think this kind of crossover projects brings your music something new? And how?

Huun-Huur-Tu: We do not thing that crossover projects really change our own music. But in these very projects our music definitely finds new ways, new colors – especially when some magic connection happens, and then it becomes more than just a sum of 2, 3 or 4 ethnic cultures, it becomes really new music.

What’s the key point of making a link between your music and other music / tradition and creation?

Huun-Huur-Tu: This questions relates to previous one. The key point is to exceed the level of just a “sum” of several cultures. The key point  is to create a new quality, new music as a result of collaboration – when particular ethnic elements not just “co-exist” with each others, but “speak” to each other and find a way to create a perfect unity.

Some people think “crossover” is kind of mixing cultures, and take it negative. What’s your opinion? Could you please take some examples to explain it? (For example, the cooperation with Ross Daly, Chemirani Trio or Moscow Art Trio…)

Huun-Huur-Tu: Yes, mechanical “cultural mix” might lead to artificial, boring results. But you mention very important names for us – our project with Ross Daly and his Greek musicians and Chanirani Trio from Iran, as well as the joint project with Bulgarian Voices Angelite and Moscow Art Trio are perfect examples of our most successful collaborations, when the initiators and music leaders of collaborations (Ross Daly and Misha Alperin respectively) have managed to create real unity and harmony between all participants. As a result – in both cases joint music is far more than jut a “blend” of ethnic components, it´s rather self-sufficient new music, when different ethnic elements work for the common idea and enrich each other.